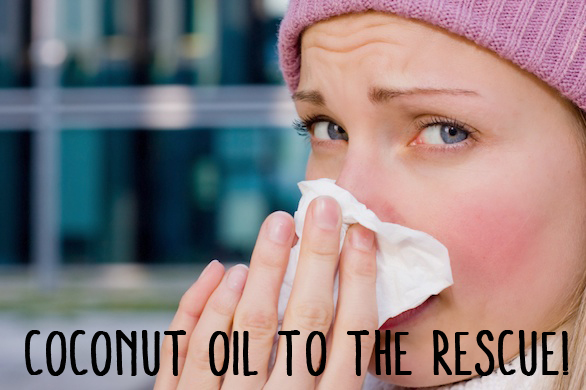 Extracted from the nut of the coconut palm tree, coconut oil contains a fatty acid called lauric acid, which has anti-bacterial, anti-microbial, and anti-inflammatory properties. It also has anti-viral properties which make it perfect for fighting winter colds. Studies have shown that coconut oil can bolster a weakened immune system by improving white blood cell counts, which helps the body directly fight viruses and infections.

To prevent colds, adults can consume 3-4 tablespoons of coconut oil per day. This can be added to other foods or used in cooking. Some people like the flavour so well that they can eat it right out of the jar. You can also drink coconut milk or eat the meat of this nutritious nut to harness the power of coconut`s fatty acids. But most health benefits can be found right in the oil, and regular consumption can build up the immune system so it has a better chance of fighting colds before they ever start.

Once a cold has been contracted, however, coconut oil can help alleviate many of its symptoms and even shorten the duration of the cold. In order to help clear sinus passages, an ill person can rub organic, cold-pressed coconut oil with a couple drops of peppermint or eucalyptus essential oil on his or her chest. It should be massaged into the upper back and the head as well. Being able to breathe more easily will allow the sufferer to sleep better, and a good night`s rest is important to the healing process.

Melted into tea or a broth, coconut oil can gently soothe a sore throat and ease coughing in addition to boosting immunity and fighting the virus directly. It can also be mixed with oatmeal and other warm cereals. Or you can try coconut milk in a smoothie. All of these options may appeal to someone who is sick and may not feel like eating heavy foods. However if it is consumed, coconut oil will provide many benefits to cold sufferers.